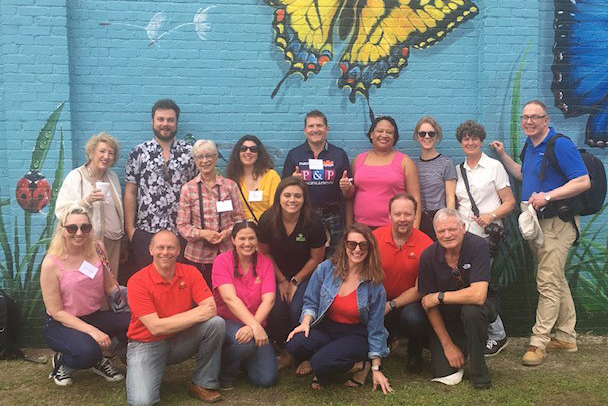 The successes surrounding Lake City’s revitalization are not going unnoticed. Seth Kines, Visit Lake City SC’s Executive Director, says that he feels that “Lake City has arrived on not only the national stage but the international stage as well!” Coming on the heels of being named the “Best Small Town Cultural Scene” by USA Today 10 Best Reader’s Choice in 2018, Lake City has recently been named one of the best places to visit in May by Travel + Leisure magazine! Mentioned along with notable international locations like Botswana, Monaco, London, and Stockholm, Kines says “It’s thrilling to see Lake City gain international recognition as a recommended travel destination.

This clearly demonstrates the power of small-town revitalization to create powerful positive change, both economically and culturally.” Another indicator that Lake City has hit the international radar came with early April’s new transatlantic flights between Charleston and London. Kines lured a group of a dozen members of the British Guild of Travel Writers to Lake City for a tour of historic downtown, and a traditional southern BBQ lunch at Piggyback’s BBQ and Catfish. This fun, enthusiastic group of travel writers couldn’t resist posing in front of the latest public mural in downtown Lake City’s ever-growing collection, an untitled creation by artist Donald Walker. Kines also offered an update on some of the most recent developments with Lake City’s continuing progress.

Check out this piece from British Guild of Travel Writers, who visited Lake City earlier this month