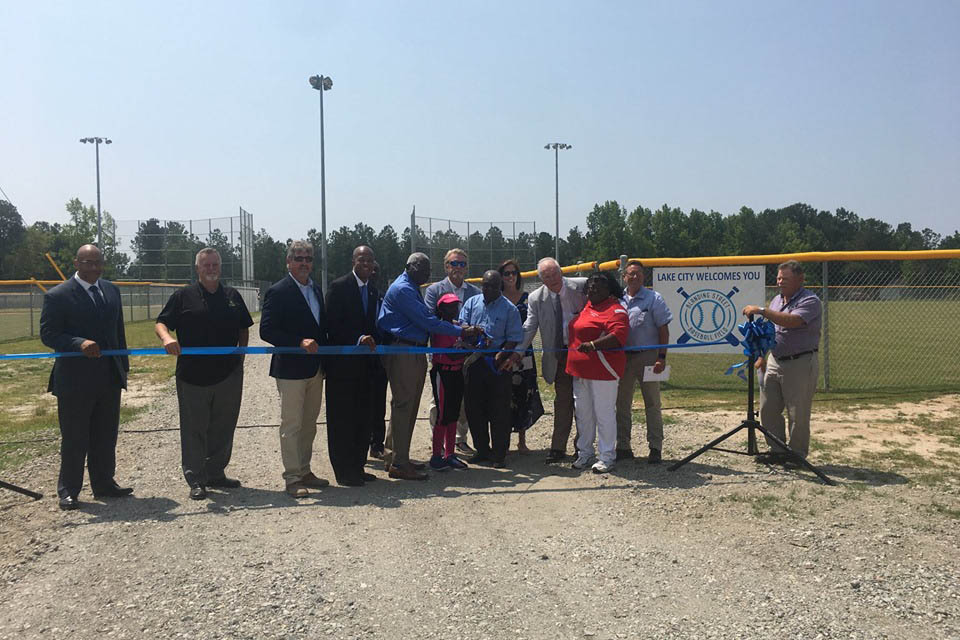 Community members cut the ribbon to the NEW Blanding Street Baseball Field! This is the first phase of what will become the cornerstone of recreation in Lake City for decades to come!

Take me out to the ball game! Over 25 years ago I started spending most of my springs and summers at Lions Park, part of the Lake City Parks and Recreation. My older brother played ball and I spent many a day on the playground until I was old enough to start swinging my own bat. I remember watching the games feeling that I couldn’t wait until I got my chance to be a part of a team, part of something I hadn’t had yet.

Back and forth on the swing I would go while watching the innings pass. There was always so much activity on the playground. You would spin on the merry-go-round to get as dizzy as you could manage while hanging on for dear life. You climbed to the top of the hot metal bar jungle gym before your fingers felt like they were burning, just so you could beat your friends. Also, you had to be sure you and your friends got the swings at the same time, so you could see who would get the highest swing and could jump the furthest away.

Thwack! That sound was so often heard from the tennis courts that were just behind the playground. There was almost always a match going on, if they were singles or doubles, you could almost bet on having to wait for a court to open for a match with your friends or rivals. Sometimes, if you timed it just right, you were able to get out on the court with nothing but your friends and a tennis ball for your own little version of handball since no one our age owned rackets, not that we needed them.

Buy me some peanuts or Cracker Jacks was the thought going through all the children’s minds when they went to LionsPark. Mrs. Cynthia Mallette, still a cornerstone at Lake City Parks and Recreation, would be at the concession stand, handing out all the goodies we could have wished for as kids. Occasionally, our parents would give in and let us have all our heart’s desires. As a parent now, I tend to limit my children’s intake of those sweet goodies to prevent riots at bedtime. When we do make those now way-too-often trips to the ball field, I let my kids have the tootsie pop or candy rocks. I want them to know the magic in those visits: the happiness I felt as a kid at the ball field still lingers.

On a warm summer day, we would all gather at the tables under the cover of the awning for a picnic with our favorite foods and enjoy time with the family. It was a time to gather and catch up with the ones we didn’t see often. There was enough at the park to keep the kids busy and entertained while the parents could keep a watchful eye on them.

One, two, three strikes you’re out. At the beginning of the season the coaches would all gather to decide on teams and the players. It was always a game of anticipation for us while we waited to see who they chose-what team wanted to bring you into their fold. I was ecstatic when I was selected by Mack’s Body Shop team, coached by Mrs. Sheryl Lane. They were the best team with the best players in the league! I knew it was going to be an exciting year with a lot of learning, fun, and making new friends. There are now so many kids wanting to play and have those comrades next to them that more ball fields have been added to accommodate more fun and exciting times at the Blanding StreetBaseball Field.

At the old ball field is where I spent my youth. Now, I take my children who play ball, run around the playground, and swing for them to experience the magic of the park. Lions Park now has a lake with a walking trail for everyone to go for a stroll. There is a new outdoor shelter that people can rent for their picnics and events. Recently, a donation was given that made it possible to build new ball fields for the future generations to use. It is through the hard work, generous patrons, and a strong community that our beloved park has lived on for generations and will continue to do so for many more. I look forward to the day that my son steps on one of those fields to start making memories he can pass on to his children in the future.